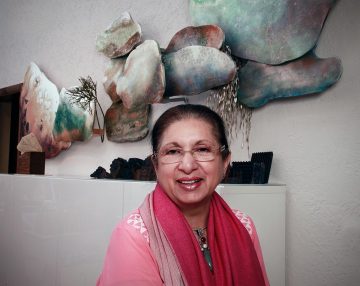 Saberah Malik, of Warwick, has combined the traditional and the innovative in both her art and her life. The daughter of an Indian civil engineer, Malik was a first generation Pakistani who grew up traveling throughout Pakistan, absorbing the region’s art and culture. She received her BFA and MFA in graphic design and was awarded a National Merit Scholarship, which brought her to Pratt Institute in New York to receive a Masters in Industrial Design. Following her arranged marriage, Malik and her physician husband moved to the United States. After her children were grown Malik returned to art making, and through the practice of shibori, she created her technique of manipulating fabric into “ethereally transparent forms of stones, bottles, and other artifacts.” She has exhibited her work in solo and group exhibitions, both nationally and internationally, and has won numerous awards.