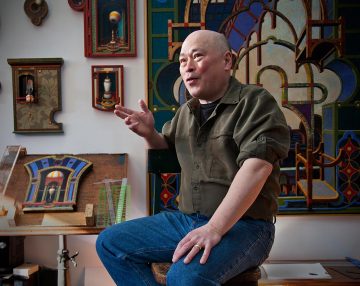 Richard Whitten’s paintings are meticulously crafted images on shaped wood panels. They are definitely painting but teeter at the edge of becoming sculpture. Whitten says, “My paintings imply the existence of places and objects of desire that, like the garden and flowers in Alice in Wonderland, can be glimpsed but  neither reached nor acquired. They are about intellectual play.” Richard Whitten earned a BA in Economics from Yale University and an MFA in Painting from the University of California, Davis, where he studied with Wayne Thiebaud and Robert Arneson. He has had numerous exhibitions on both coasts. Notable are solo exhibitions at the University of Maine Museum of Art in Bangor, Maine; the Frye Art Museum in Seattle,  Washington; and the Newport Art Museum in Newport, Rhode Island. Whitten is presently a Professor and the Chair of the Department of Art at Rhode Island College.