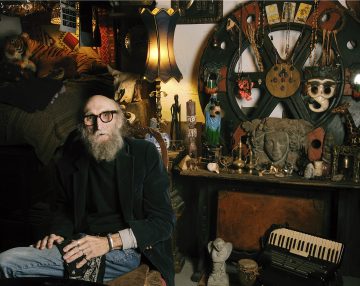 Mark Taber’s artistic world is one of other people’s “junk” assembled to create fantastical chariots. These assemblages of everyday objects that the Rhode Island native, born in 1943, has been making for over twenty years are often whimsical but also a trip into “a parallel reality,” as Taber says. Music informs Taber’s visions as well, sometimes literally, with remnants of piano keyboards, and also in its ability to transport us to different places. Taber, who grew up in a musical family, is a longtime and well known pianist in Rhode Island. His work has been exhibited regionally, and a piece was included in the Smithsonian SITES publication Seeing Jazz.