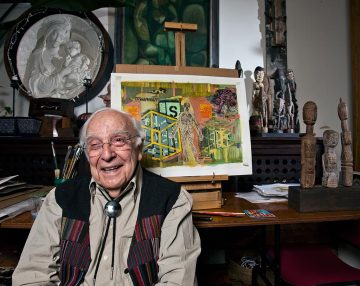 Collage is at the heart of John DeMelim’s art; to him it is the most cohesive way to represent the myriad of differing realities we experience each day. His images derive from extensive travel and study of ancient cultures in the Amazon, New Guinea, and Mexico, as well as visits to Mali, Japan, and Greece, with his late wife. DeMelim’s home in Johnston, Rhode Island is a museum of art and artifacts from this rich life. He received a BS from Tufts University; a BFA from the School of the Museum of Fine Arts, Boston; and an MFA from the University of Guanajuato, Mexico. A longtime educator at Rhode Island College, he was an integral force in the creation of its art department. DeMelim brings a mastery of printmaking techniques, painting, and assemblage to his collages which take both two-dimensional and three-dimensional form. He has shown his work in New England, New York, California, and Mexico.