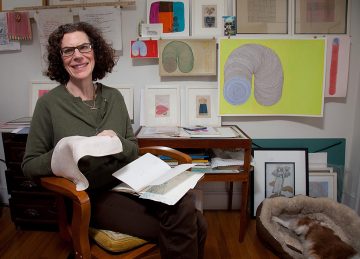 Jessica Deane Rosner was raised in Manhattan and received her BFA from the Cleveland Institute of Art, where she majored in enameling. Back in New York, Rosner worked in enamel and then jewelry before relocating to Cranston, Rhode Island, almost thirty years ago. She began to work in pen and ink, eventually finding satisfaction in two distinct kinds of drawing: narrative with text and purely abstract explorations. She says “in both genres I like my work to show my hand and to illustrate a certain density of page, so that even if all there is, is line, there will be may of them and the final image will be as complete an exploration of line as I can achieve.” The Diary Project, which combined both stylistic elements, was shown in its entirety at the DeCordova Museum, and she has exhibited her abstract ink drawings in Boston, Rhode Island, and New York.