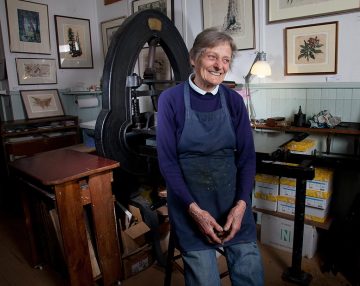 Ilse Buchert Nesbitt was born in Germany and spent her childhood in Japan, absorbing the influence of sumi brush painting practiced by her mother. In the 1950s she studied at the Art Academies of Hamburg and Berlin, concentrating on typography and book design. As a personal art form, the woodcut seemed a natural progression from typography; both processes involve the relief technique. In 1960 Nesbitt moved to the United States to teach at the Rhode Island School of Design. At RISD
she met her late husband, Alexander Nesbitt, a calligrapher and type historian. They moved to Newport in 1965 and founded Third & Elm
Press which, over the years, has produced artists’ books and pamphlets. Nesbitt continues to create woodcuts, making her own paper in the traditional Japanese way. She has exhibited in the United States and Germany where she is also represented in private and public collections.