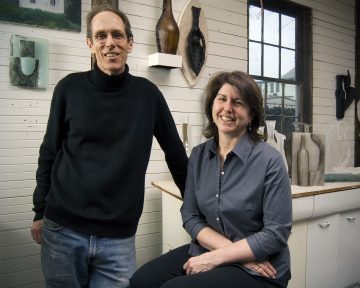 Life’s course does not always follow the planned route. These days, as time allows, I am drawn to the sea, to bask in its restorative powers. I was raised on the water, the daughter of a sailor, and have always had an emotional response to the sea’s energy. I paint from life, plein air, in locations which are imbued with peace and tranquility. In response to the elements, awash in color and light, I work to express this feeling of calm inspired by nature. My paintings are studies, impressions of a day, a location, a time of year, a moment, a memory. –Elizabeth Pannell, 2008

Watkins’ work is about contemplation as much as it is about the action of making. His work slows down our perceptual process so that we can consider the possibilities of interpretation rather than having the obvious and often literal shapes name themselves. The universality of his forms reflects whole worlds of faunal, floral and artifactual antecedents. We soon find ourselves asking questions. Does the transparency of a glass form complicate its exterior shape or help us perceive its major volumes? Does a shaped outline in a relief derive from a three-dimensional work or vice versa? Are the other elements which give context to his pieces like wall plaques or horizontal bases integral to his objects or apart from them? Unlike most objects in our modern world, the things that Watkins makes afford his viewers the chance to think, to consider the possibilities, to contemplate, and thus to imagine. From: A Pattern Language: The Sculpture of James Watkins by Ronald J. Onorato.