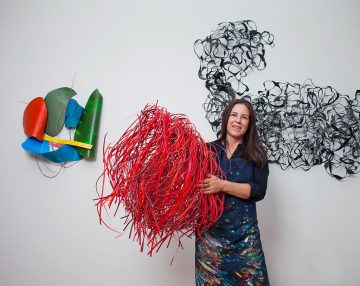 Barbara Owen received a dual degree in sculpture and poetry at Bennington College. She wrote a creative thesis under the direction of the poet Ben Belitt, studied sculpture with Brower Hatcher and painting with artist Sidney Tillim. Her work has been featured in numerous venues nationally and in 2016 she was asked to exhibit with the Arts in Embassies program and has paintings in Suriname and Papua New Guinea. Owen has participated in artist residency programs nationwide, including the MASS MoCA/Assets for Artists in 2015. She writes, “Throughout my career I have worked in series in order to explore how color, shape, material, and paint itself develop and change one’s experience of each piece, while consistently employing a history of shapes. As a formalist, my work plays with space and the relationship between shapes. As a colorist, I am trying to create effective and emotional responses to the work.”